skip to main | skip to sidebar

The Whale Shark, the largest fish in the world.

The whale shark (Rhincodon typus) is the largest fish in the world, reaching up to 20m (60 feet). Frequently, its name and huge size cause people to confuse them with whales. Unlike whales, wich breathe oxygen from the air, whale sharks obtain oxygen through their gills, just like fish and other sharks.
What makes whale sharks different from other sharks is that whale sharks do not eat meal, but consume tiny animals floating in the sea, called plankton. In feeding habit, they are similar to most or the larges whales, catching this tiny floating plankton by opening their mouths and letting in large amounts of seawater and passing it through a filtering structure located on their gills. 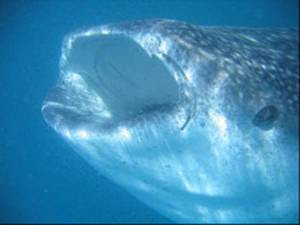 Whale shark live in all tropical and subtropical seas and are know to travel great distances. We do not know how many of their biology and behavior, such as, where they migrate and where and how thwy reproduce. Mexico is one of the few contries with the privilege of having visits of these magnificent animals. They can be found in the Gulf on California , on the south-Southeast side of Bahia de La Paz they are present from April to June and October to January. 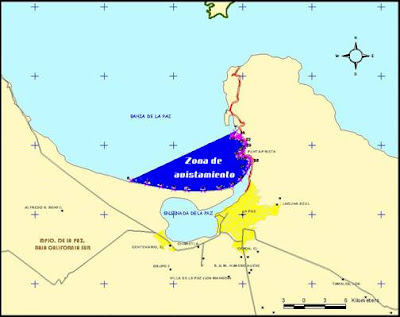 Whale shark meet in large numbers in Bahia de La Paz, giving people from all over the world an opportunity to experience one of the most exciting encounters between people and nature. Unlike other shark, diving among whale sharks is safe because of their exceptionally gentle nature. Ecotouristm can get relatively close to these giants and enjoy a memorable experience, providing they adhere to certain rules.

When you are in the whale shark aggregation zone of Bahia de La Paz during the sighting season, the following rules of conduct must be followed by tourist: